BRUSSELS — France’s deportations of Gypsies are « a disgrace » and probably break EU law, the European Union’s executive body declared Tuesday in a stinging rebuke that set up a showdown with French President Nicolas Sarkozy’s conservative government. 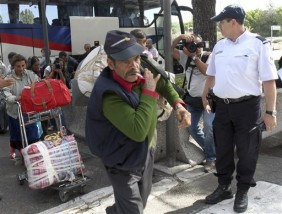 In recent weeks, French authorities have dismantled more than 100 illegal camps and deported more than 1,000 Gypsies, also known as Roma, mainly back to Romania, in a crackdown that has drawn international condemnation.

EU Justice Commissioner Viviane Reding said she was appalled by the expulsions, « which gave that impression that people are being removed from a member state of the European Union just because they belong to an ethnic minority. »

This « is a situation that I had thought that Europe would not have to witness again after the second World War, » she told a news conference, adding « the commission will have no choice but to initiate infringement procedures against France. »

France could ultimately be slapped with a fine by the European Court of Justice if its expulsions are found to have breached EU law.

The crackdown continued Tuesday, as a chartered Airbus took off from the southern city of Marseille for Bucharest with 69 Roma on board, police officials said. Like others repatriated by France, they received a stipend of up to euro300 ($385) per person for resettlement.

At Bucharest’s Baneasa Airport, Argentina Rosca, 30, seven months pregnant with her sixth child, lugged a huge bag as she exited the airport.

« It’s good to be back because my children are here, » she said.

Alexandru Musa, 37, had been in Marseille for three months working in construction, earning euro1,000 a month under the table. He said he would return to France: « I earned good money and I was happy there. »

In Paris, French Foreign Ministry spokesman Bernard Valero expressed « astonishment – that’s the least you can say » at the announcement by the European Commission.

« We don’t think, with this type of statement, that we can improve the situation of the Roma, who are at the heart of our concerns and our action, » Valero told reporters. « It’s not time for polemics. … It’s time for work in favor of the Roma population. »

Roma face widespread discrimination in housing, jobs and education across Europe. As EU citizens, they have a right to travel to France, but must get papers to work or live there in the long term.

The advocacy group Romeurope estimates that up to 15,000 Roma live in France. French authorities have no official estimate.

Sarkozy has linked Roma to crime, calling their camps sources of prostitution and child exploitation. He has insisted that France does not want to stigmatize Roma, but the deportation policy is being criticized as discriminatory because it singles out one community.

Reding at times appeared angry as she read out her statement at the European Commission’s Brussels headquarters, once pounding the desk in front of her and saying: « Enough is enough. »

« After 11 years of experience on the commission, I even go further: This is a disgrace, » she said. « Discrimination on the basis or ethnic origin or race has no place in Europe. »

She also harshly criticized French authorities for telling the EU commission that it was not discriminating against Roma – a claim apparently contradicted by news reports of a government letter ordering regional officials to speed up a crackdown on illegal Roma camps.

« It is my deepest regret that political assurances given by two French ministers is now openly contradicted, » Reding said.

She was speaking about France’s immigration minister, Eric Besson, and its European affairs minister, Pierre Lellouche. Besson on Monday denied any knowledge of the reported Interior Ministry letter and did not speak to reporters Tuesday at a Brussels meeting on asylum issues.

Hortefeux issued a new letter late Monday about dismantling illegal camps that had no reference to Roma, the ministry said, but it would not provide a copy of the new letter to The Associated Press.

Some critics said the apparent flip-flop was part of a bald effort to erase any suggestion that Roma were being targeted by ethnicity.

Stephane Maugendre, the head of an immigrant support group in France, said the move « will not take anything away from the discriminatory character of the practices of regional governments and police regarding the Roma. »

Reding said she was « looking into the legal implications » of the new wording.

Associated Press writers Jamey Keaten in Paris and Alison Mutler in Bucharest contributed to this report.